The Recreational Bathing Water Quality Programme is a joint project run by NRC, in conjunction with Kaipara, Whangarei and the Far North district councils and the Northland District Health Board (DHB). The programme involves sampling water quality at a number of the most popular freshwater and coastal swimming sites around Northland for 12 weeks over the summer months. For results from freshwater sites, please refer to the ‘Rivers and Streams' section of this Annual Monitoring Report.

Most of the coastal sites monitored through the programme are located within semi-enclosed water bodies, such as estuaries and harbours. Water quality in these locations is more variable than open coastal sites as it is influenced by freshwater input, either from rivers and streams or rainfall run-off, and is therefore more vulnerable to pollution.

During the 2007-08 summer season, 44 coastal swimming sites around Northland were monitored. Samples were collected from each site on a weekly basis and analysed for Enterococci bacteria. These bacteria indicate faecal contamination of water from warm-blooded animals, which in turn indicates the likely presence of pathogens which can affect human health. 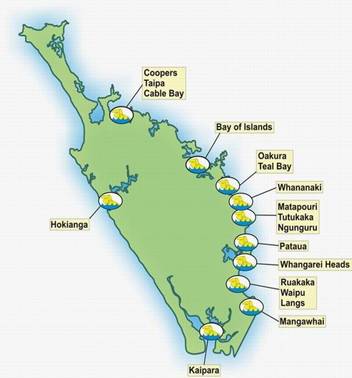 The results for each site are compared to water quality guidelines issued by MfE. Each week, sites are given a grading based on the levels of bacteria present – green for ‘safe for recreational use', orange for ‘caution' or red for ‘unsafe for recreational use'. These gradings and results are posted at the end of each week on the NRC website - http://www.nrc.govt.nz/swimming.

The table below shows the thresholds used to grade water quality at each site. Results from weekly sampling are forwarded to each of the district councils and the DHB at the end of each week. In the event of an ‘alert' or ‘action' result, the relevant district council and DHB is informed within 24 hours. They then take the necessary action to minimise any potential risk to human health.

· 94% of the samples taken were less than the ‘alert' threshold, indicating that water quality at the sample sites was likely to be ‘safe' for swimming.

· 2% of samples taken were within the ‘alert' threshold, indicating some pollution at the sample sites (‘caution').

· 4% of samples taken were within the ‘action' threshold, indicating the water quality at the sample sites was likely to be ‘unsafe' for swimming.

· Further sampling and investigation was undertaken at sample sites with ‘alert' or ‘action' results in order to monitor water quality and determine the source of contamination.

· Warning signs were erected at any sample sites with consistently ‘unsafe' water quality.

The results from 2007-08 indicate that water quality at virtually all semi-enclosed sites (e.g. estuaries) or sites adjacent to major river outflows is effected by heavy rainfall, with the majority of ‘alert' or ‘action' results recorded after heavy rainfall events. Levels of Enterococci usually return to safe levels within 1-2 days of these events.

In the Whangarei District, four sample sites had more than 10% of samples exceed the recommended ‘safe' level of bacteria (<140 Ent. per 100ml). These sites were the Ruakaka River, Matapouri Estuary, Whananaki Estuary and Ohawini Bay. The remaining sites in the district had no or only one sample that exceeded the recommended guidelines during 2007-08.

Map: Percentage of samples that exceeded the recommended ‘safe' guideline of less than 140 Enterococci per 100ml of seawater in the Whangarei District

In the Kaipara District, two sample sites had between 1-8% of samples above the recommended ‘safe' guideline. These sites were at Pahi and Mangawhai. Samples taken from the remaining sites complied with the recommended guidelines on all sampling occasions. 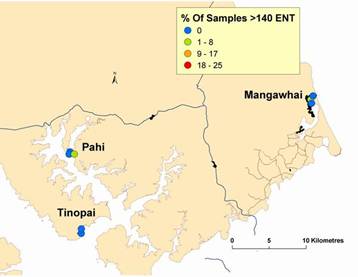 Map: Percentage of samples that exceeded the recommended ‘safe' guideline of less than 140 Enterococci per 100ml of seawater in the Kaipara District

All of the samples taken from sites in the Hokianga Harbour complied with the recommended guidelines during 2007-08. 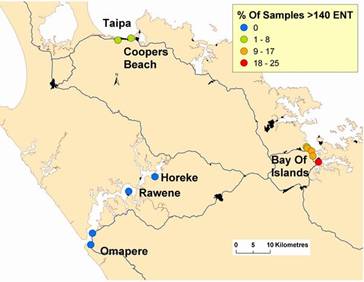 Map: Percentage of samples that exceeded the recommended ‘safe' guideline of less than 140 Enterococci per 100ml of seawater in the Far North District