The Northland Regional Council maintains a comprehensive network of hydrometric stations (such as rainfall, water level, flow and some climatic stations). Monitoring and obtaining information about Northland's climate and water resources is important so that short and long term changes in climate can be detected.

Hydrometric stations have been selected to provide region-wide coverage. Stations are selected to target key river systems that can be used for flood warning purposes and for low water-flow monitoring. The map below shows all the automatic hydrometric stations in Northland including water level, rainfall and groundwater stations operated by NRC, NIWA and MetService.

The Northland Regional Council's hydrometric network during 2005-2006 comprised the following:

There was a 1.15% loss in data for the 21 automatic rainfall stations from July 2005 to June 2006 (compared to 2.1% in the previous year). The loss of record was mainly attributed to faulty instrumentation.

The installation of the automatic rainfall stations on Pouto Peninsula and at Omapere have been delayed until next financial year and should be completed by late 2006.

Similarly, a new telemetered water level station was installed in the lower Kaihu River at Parore in February 2006, as shown in the photographs below. This station will provide water levels and flows in times of extreme flood events in relation to the Kaihu River Management Plan. 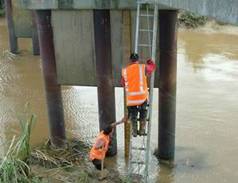 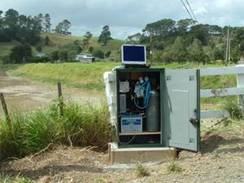 The Regional Council also operate five automatic water level recorders in tidal environments. These are located on the east coast at Rangaunu Harbour, Marsden Point and Opua, and the West Coast at Pouto Point and Dargaville. Water levels are continually recorded at either five minute (Marsden Point and Pouto) or 15-minute intervals (Rangaunu Harbour, Opua and Dargaville) over the full range of tidal cycles. Barometric pressure, wind speed, wind direction and rainfall are also measured at the Dargaville station and barometric pressure at Pouto Point.

During periods of extreme high tides, there is potential for flooding in low lying coastal areas and Dargaville Township. During such an event water level, wind and barometric information is gathered via the telemetry system and regularly forwarded to the NRC Emergency Management Officer.

Three ground water bores are measuring water level and conductivity in selected bores predominantly to measure saline intrusion within the groundwater system. These include bores at Mangonui, Russell and Ruawai. The installation of automatic rainfall stations at Mangawhai and Coopers Beach have been delayed until suitable groundwater bores can be selected. Installations are scheduled for early in 2006-2007.

Stations operated by NIWA and MetService complement the Northland Regional Council's hydrometric network. These include: