Case Study One: A very wet July and dry August 2005

Above average rainfall was recorded in all areas of Northland in July 2005, mainly as a result of heavy rain falling over three days from 5 to 7 July.

On 4 July the MetService issued a heavy rain warning for the Northland region due to a slow moving heavy band of rain developing north of the region. According to the MetService ‘the Northland region was to expect periods of heavy rain and a few thunderstorms with 80 to 100mm falling in some places, particularly in eastern areas. Rainfall intensities were expected to reach 25 to 35mm/hr'. On 5 and 6 July heavy rain was being recorded in the far north and eastern areas of Northland and as a result council staff issued a flood warning. The band of rain was very slow moving and over a period of three days the MetService had issued six updates.

The photographs below show Mangahahuru Stream, near Whangarei, on 13 July 2005 in high flows (on left) compared to typical low flows during summer (on right). 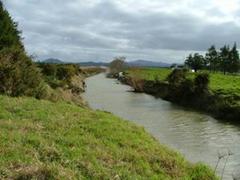 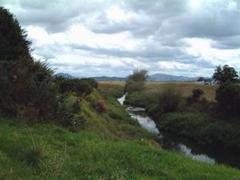 In contrast, Northland experienced a very dry August, with all rainfall stations recording well below their normal August rainfall amounts, varying from 32 mm recorded at Dargaville (the August average is 130 mm) to 130 mm in the Waima Range at Waimamaku (average 304 mm). Reports from some of the daily rainfall readers indicate that August 2005 was the driest since 1981. Generally, Northland received only 43% of the expected August rainfall. Similarly, river and streams flows were only 34% of their expected flows for August. At the end of May 2005, groundwater levels in the Kaikohe, Whangarei, and Mangawhai areas were at their lowest levels since monitoring commenced in 1980. Groundwater level monitoring from Kaikohe in the north to Mangawhai in the south indicated the lowest winter recharge since the early 1990's. A rise in ground water levels was recorded during early July; however water levels receded again over August.