There are two main components of the EMP; fine scale assessment of seabed habitat and broad scale mapping of intertidal habitat. The fine-scale assessment uses analyses of a range of characteristics relevant to estuarine condition, such as faunal and floral composition, nutrient and contaminant status and seabed sediment grain size. This fine-scale component is typically undertaken annually for three to five years to gain sufficient baseline data, and thereafter at three to five yearly intervals. The broad-scale mapping determines the proportion of different habitat coverage within the estuary. The broad scale component is done using existing aerial imagery and GIS techniques, which is ground truthed and this is repeated at every five to ten years.

The main deliverables from the implementation of the EMP are:

At each sampling site one 60m x 30m sampling station was established in soft-sediment (sand/mud) habitat in the mid to low intertidal zone. Each station was divided into 12 equal sized plots and samples collected for the following: 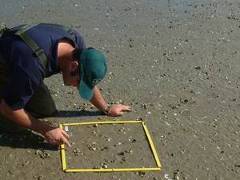 An example of the redox layer.

In both Whangarei and Ruakaka estuaries there were no significant macroalgae beds observed, although Ulva lactuca (sea lettuce) was present in strandlines. Concentrations of sediment chlorophyll a indicated low to moderate microalgal mat development. Sand was the dominant sediment in both Whangarei and Ruakaka, making up 91.4% and 97.5% of the total sediments on average respectively. The redox layer ranged between 5 to15 mm in the Whangarei sampling stations and 10 to 20 mm in the Ruakaka sampling station.

The levels of nutrients in sediments in both estuaries indicate that they are both moderately enriched, particularly with respect to Nitrogen (TN). Trace metal levels were all below ANZECC-low effect level guideline values (refer to table 3.5.1 of the ANZECC guidelines 2000). These results indicate that nutrient enrichment could be a key pressure on the health of the estuarine environments sampled.

Comparison of average physico-chemical characteristics of sediments from the two estuaries sampled in this study (n=10).

The mean abundance of epifauna was reasonably variable between estuaries. The most abundant species in the three Whangarei sampling stations was the Gastropod Zeacumantus lutenlentus (koeti/horn shell) and to a lesser extent Diloma zealandica (mudflat topshell). By contrast the most abundant species in Ruakaka Estuary was Elminius modestus (estuarine barnacle) followed by the bivalve Austrovenus stutchburyi (cockle). 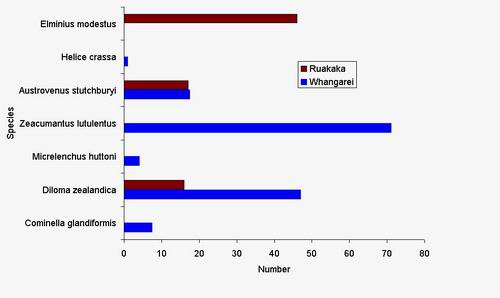 Infaunal species richness and abundance was dominated by bivalves in both estuaries sampled during 2005-06. Cockles (A. stutchburyi) were the most abundant followed by wedge shells (Macomona lilliana) and pipi’s (Paphies australis). Small numbers of polycheates (worms) were also identified. 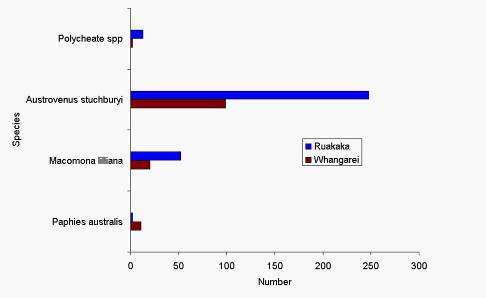 Broad scale habitat mapping was done for each estuary to assess and index habitat coverage in the estuaries. This was done by using a combination of aerial photographs and ground truthing these by walking and boat. Results from this assessment are placed in to GIS to represent habitat coverage and determine abundance and diversity.

The mapping of the intertidal habitats in the Ruakaka Estuary showed that the dominant habitat cover was water, followed by firm sand in the mid and upper reaches of the estuary to mobile sand in the lower reaches.

The most abundant vegetative habitat in the upper reaches was Avicennia marina var. resinfera (mangrove). There is anecdotal evidence (confirmed by old aerial photos) that the extent of mangroves has increased in the last thirty years within the upper reaches. The remaining habitats were rushland, dominated by Leptocarpus similis (oioi/jointed wire rush) and to a lesser degree Juncus krausii (wiwi/sea rush), which dominated the margins of the middle reaches. The lower reaches were lacking intertidal vegetation. There were minor areas of scrubland, herbfield and macro algae beds. 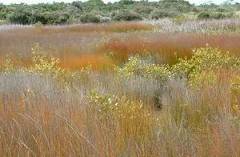 An example of the map output from this broad scale mapping for Ruakaka Estuary is available on the NRC website as a pdf file in the coastal section of the 2005-2006 Annual Monitoring Report.

Due to the large scale and diversity of the Whangarei Harbour, the digitisation of intertidal habitats has not yet been completed. However an outline of the findings to date is presented below.

The survey of the intertidal habitat of the Whangarei Harbour indicated a relatively broad range of habitats, dominated in the upper harbour by mangrove scrubland, de-vegetated substrate and a mixture of remnant rushland. The remnant rushland was largely due to stock damage as a consequence of unfenced coastal margins, as is the case in the photo below. The substrate in the upper reaches was dominated by a mixture of soft mud/sand.

A feature of the southern side of the harbour stretching from One Tree Point to Mangapai is the sand/shell banks. They were dominated by oioi, wiwi and scrubland featuring Plagianthus divaricatus (saltmarsh ribbonwood), Meuhlenbeckia complexa (pohuehue/ wire vine) and in some cases Ulex spp. (gorse). Parts of these banks were also dominated by herbfields with the dominant vegetation consisting of Sarcocornia quinqueflora (ureure/glasswort), remuremu and to a lesser degree Samolus repens (maakoako/sea primrose). 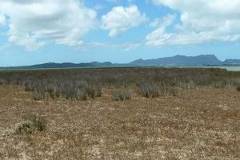