The safe disposal of redundant or unused agricultural chemicals and other waste hazardous substances is an issue for all communities, especially given the limited disposal options available in this country. Currently, only two commercial hazardous waste disposal facilities operate in the North Island, situated in Auckland and Wellington. While some New Zealand landfills offer co-disposal for low-key hazardous wastes, this option is not available in the Northland Region.

Some of the more hazardous agricultural chemicals held by farmers and horticulturists (especially persistent organic pollutants such as DDT, Heptachlor, Lindane or Dieldrin) cannot be legally disposed of in New Zealand. These chemicals require special disposal technologies such as high temperature incineration.

The Regional Council operational depot is purpose-designed for waste hazardous substances. At this depot the waste hazardous substances are repacked, labelled and placed in temporary storage until being despatched to Auckland for long-term storage or disposal. The Regional Council operational depot was moved from Pohe Island landfill to the new Whangarei District Council Resource Recovery Park in late October 2005. 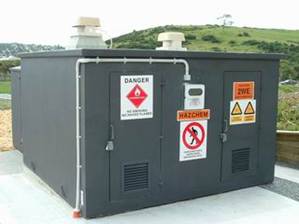 Spill and safety equipment is available on-site at all PGG Wrightson collection depots, in the event of an emergency such as the accidental spill of chemicals. The Council regularly updates emergency procedures, as well as restocking equipment when necessary.

Northland Regional Council also operates a mobile collection service where individual properties throughout Northland are visited to recover chemicals that may be leaking, require repackaging or are in a deteriorating condition. The Council also provides assistance to private organisations requiring chemical disposal including the collection of laboratory wastes from schools and industrial wastes (such as solvents and timber treatment sludges).

The waste hazardous substances collected in the 2005-06 financial year included:

Approximately one tonne of insecticides and fungicides were collected from throughout the region with the majority of these products originating from the Kerikeri area like last year. Approximately 90% of the total volume of insecticides and fungicides collected were destroyed due to the deteriorating condition of the contents, or the labels being illegible and therefore the contents unknown.

Approximately 900 kilograms of Persistent Organic Pollutants (POP's) were collected, mainly during the mobile collection service. Some of the POP's handed in for destruction were particularly hazardous substances including quantities of DDT, Chlordane, 245t, 24d dust and Lindane. All of these wastes have been sent overseas for destruction by high temperature incineration.

Approximately three tonnes of herbicides were collected from throughout the region, predominately from the four jointly owned and operated Northland Regional Council and PGG Wrightson collection depots. Approximately 50% of the herbicides collected are still readily available on the market and legal to use. These were redistributed to land care groups and other organisations for weed control. The remainder of herbicides collected were in a deteriorating condition and were exported to Europe for destruction.

Agrecovery is a New Zealand wide plastic container stewardwship developed for the agriculture and forestry sector. It will give farmers and growers access to a sustainable and environmentally preferred disposal alternative to landfilling or burning their containers.

The programme will be funded on an ongoing basis by way of a levy on products put in the market by participating brand owners (agriculture and forestry product manufacturers). The Agrecovery foundation will manage all facets of the scheme.

Agrecovery has agreed to provide shipping containers or similar for the temporary storage of agrichemical containers. It is likely that these containers will be located near Kerikeri and in Whangarei. The programme will commence in early 2007.

The Regional Council has at present a small amount of waste hazardous substances stored in Auckland, as the majority of it has recently been sent overseas for destruction (arranged through Ministry for the Environment). The remaining waste hazardous substances are packed in UN approved containers and stored in licensed premises. The Council regularly inspects the integrity of the containers and their contents until they are sent overseas for destruction. Packing shed, where waste hazardous substances are packed and sealed in drums for storage.