As you can see from the figure below, burning and smoke nuisance and odour incidents were the most common air related incidents, followed closely by industrial emissions, spraydrift and dust nuisance. There were 1 abrasive blasting incidents reported in 2005-06. Other incidents affecting air quality included farm dairy effluent, sewage, hazardous substances and refuse.

The number of air related incidents reported to the Council has remained stable with 458 reported during 2005-06, compared with 459 during 2004-05. 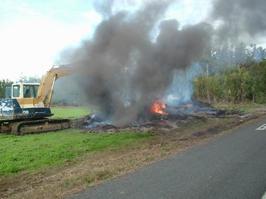