Members of the public are being invited to an upcoming information sharing evening to discuss a number of Whangarei-based flood projects, including an $8m-plus stormwater detention dam in Raumanga. 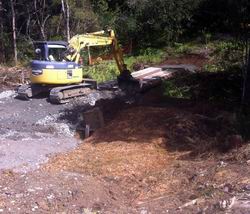 Construction of a temporary bridge to provide machinery access across Raumanga Stream as part of the services relocation work in advance of the proposed Kotuku dam.

The Kotuku detention dam is part of a multi-phase project to reduce the impact of flooding in Whangarei's Central Business District and parts of Morningside and Raumanga, which also involves river clearance to remove blockages and recent upgrading of the city's Rust Ave Bridge to improve stream flows beneath it.

Bruce Howse, Land/Rivers Senior Programme Manager for the Northland Regional Council, says with the Rust Ave bridge project now largely complete and physical construction of the dam due to begin within months, the council is keen to update interested members of the public on the various local projects.

"Anyone interested is welcome to attend the information-sharing evening, which will be held at council's Water St offices from 6pm on Wednesday 16 April."

Mr Howse says the dam will be paid for via a targeted rate on more than 17,000 properties in the CBD and contributing catchment areas and will be one of the largest engineering projects undertaken by the regional council.

When completed about the middle of next year, the 18-metre high dam (to sit at the ends of Raumanga Valley Road and Kotuku Street) will hold up to 1.27 million cubic metres of floodwater during heavy rain.

"That's about two-thirds of the capacity of the existing Whau Valley dam. But unlike the Whau Valley dam, which provides much of the city's drinking water, the Kotuku dam works by slowly releasing trapped stormwater over a couple of days, reducing river swelling and downstream flooding that would otherwise threaten the CBD, parts of Morningside and the Raumanga Stream floodplain during a storm."

Mr Howse says the targeted rate that will pay for the dam was established under the council's last Long Term Plan (LTP) in 2012.

"When the LTP was written two years ago, the dam's cost was estimated at about $6.9M (excluding GST), but this has since been revised upwards to almost $8.5M. The new figure is a refinement based on completion of a more detailed dam design, peer review outcomes, quotes to relocate services like gas and power/fibre and progress with land acquisitions."

Despite the revised cost, Mr Howse says the council has not changed (and is not consulting on changing) the Whangarei Urban Rivers Management Rate as part of its proposed Draft Annual Plan (DAP) 2014/15. A month-long public consultation period on the DAP – which sets out the council's budgets and activities for the 12 months from July – begins on Monday.

However, Mr Howse says the council is likely to consider increasing the targeted rate in future as project costs do become more certain, probably in time for the adoption of the Long Term Plan 2015-2025 next year.

He says the council expects to offset some of the increased dam project costs by on-selling all or parts of some of the 20 properties it's purchasing for it as not all the land would be required long term.

"Obviously, we'll consult with the public on any planned change to the targeted rate in future. In the meantime, we'll continue to work with both the Urban Whangarei Rivers Liaison Committee and the wider community on this project to ensure it remains affordable."

Meanwhile, Mr Howse says as well as discussing the dam project at the 16 April meeting, people would also be able to learn more about the Rust Ave bridge work, which was a joint project between the regional and Whangarei District Councils and national road funding body Land Transport NZ.

He says the Whangarei works form an integral part of the regional council's Northland-wide 'priority rivers project' which involves 26 catchments across Northland; 16 in the Far North, eight in Whangarei and two in Kaipara.

"The rivers and streams in these priority catchments pose potential threats to lives, buildings, road access, infrastructure and agriculture and we're working with communities to help reduce these risks where practical."

Mr Howse says anyone interested in the Whangarei works – or the wider priority rivers project – can also visit the council's website via: www.nrc.govt.nz/priorityrivers