The wet end to summer and slightly above average rainfall over autumn led to wet ground conditions and combined with the drizzly days, gave the impression of a wet winter but the rainfall numbers tell a very different story.

The Far and Mid-North experienced below average rainfall for winter overall; Kaitaia has a 226mm rainfall deficit for the previous six months. Rainfall deficits are calculated by comparing the actual rainfall totals to the expected amount, the difference is either a deficit or surplus. A major rainfall event during spring is required to make the shortfall up before summer arrives. Some of the Far North and Bay of islands rivers are running below normal flows and soil moisture deficits are well below the average. These catchments will need to be monitored closely if the dry weather continues to persist through spring. NIWA, MetService, Australian Bureau of Meteorology, MeteoFrance and the Pacific Island National Meteorological Services prepare the Tropical cyclone outlook. They are predicting near-normal tropical cyclone activity overall during November-April for New Zealand, but an elevated risk in the Cook Island and Austral Island regions, see below for more details. In 2016 NIWA completed a report for NRC describing the impact of climate change on Northland which can be found on the NRC website: www.nrc.govt.nz/climatechangeprojections

In the report, NIWA indicated over the coming years Northland will see an increase in droughts hitting the region. In response NRC developed a warning system to assist catchments, agriculture, industry and water users at a localised scale, helping with early detection of dry weather and showing the severity. Droughts can come on quite quickly, with one month of extremely low rainfall, but often with the severe droughts, it is gradual slow process, which can be hard to detect until it has the region in its grips.

When a catchment is experiencing dry conditions, the yellow and orange colours appear on the SPI map, the circles show the severity of the event. It should be noted that the Ministry for Primary Industry is the authority responsible for the declaration of a drought. The maps are an information tool to assist the communities of Northland. The maps will be run every month. Below are maps from two recent droughts in Northland. June 2018:
Rainfall totals throughout Northland in the first month of winter were higher than long term medians in most areas (around 120% of medians). These totals were influenced by two weather events, the first near the beginning of the month and the second on 20-21 June. The second event caused some flooding over SH1 at Whakapara.

August 2018:
August experienced drizzly days, but no significant weather events. Rainfall throughout the region was around 65% of typical August rainfall with higher rainfall to the northwest and lower rainfall totals to the south and east during this month. The southern and eastern areas of the region had an SPI classification of moderately dry conditions through this month.

The dry conditions through July, August and September are evident in the table below showing most of the region in rainfall deficit.

The format of the river flow map has changed to align with the rainfall and SPI maps, historically if a river was running low, the flow maps showed the entire catchment as low, which is correct with a catchment of similar geology, but Northland catchments are a mixture of geologies. Now the dots represent key river station and their flow status.

As mentioned above, the September flows reflect the below average rainfall over winter in the Mid and Far North.

In the Far north, rivers running at 40-60 percent of normal flow include:

In the Bay of Islands region, rivers running at 40-60 percent of normal flow include: Northland's aquifers are close average in water level reading, except for the systems in the Mid-North and Whangārei region, see the table below for more details: 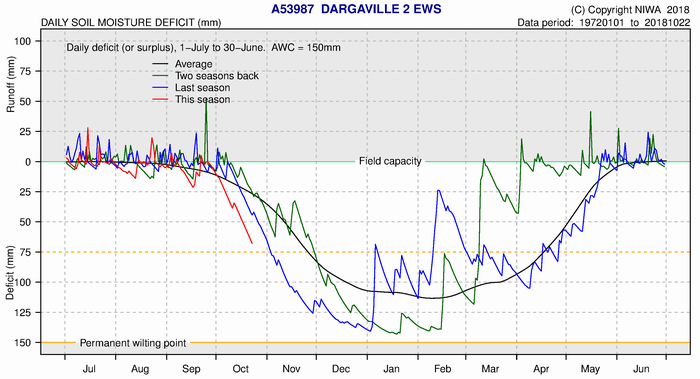